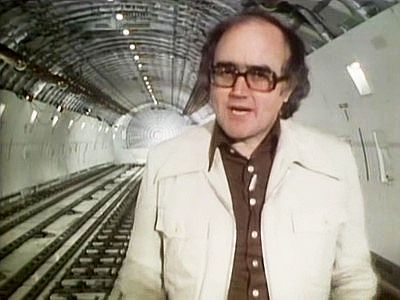 This just hit me. But, it’s little complicated, so bear with me for a minute or three. I just ran across a reference to an old PBS show, Connections. That set off bells. That show was … amazing. Hosted by a British Historian named James Burke, it was so indelibly different you couldn’t help but to not only be enthralled but to remember the vast chunks of totally unrelated stuff Burke threw at you. At the very least, if you got nothing else out of the show, you were set to win trivia contests for a very, very long time.

Here’s how the show worked – Burke, pleasant, funny, charming, and slightly sarcastic – would start with something out of the past – ancient history, medicine, agriculture, germs, science, literature, religion, you name it, it’s game for Burke. Then he would go on to seemingly unconnected events and inventions down through the ages until … he wows you with a connection, a conclusion, you never saw coming.

Case in point, this show from somewhere around 1984. It was called “Eat, Drink and Be Merry. It began with plastic, then talked about credit cards, the concept of credit, which leads back to the dukes of Burgundy back about the time Joan of Arc was running around.

The Dukes used credit to buy better armor for their army. This forced their enemy, the Swiss, to invent a new military formation to hold Burgundy off. That formation employed pikemen formed in a square. To be a pikeman in a pike square required about zero skill. No skill equaled bigger armies. Muskets replaced pikes, muskets weren’t very accurate so the same armies kept the same square like formation.

By the French Revolution, armies were getting enormous. Napoleon needed quite a few men, he recognized that an army was as good as what it was eating, so, the French invented bottled food. Which quickly became canned food for armies and navies. Canned food, however, would occasionally spoil.

In the mid-Nineteenth Century people blamed bad air for the spoilage. The race to discover the source of bad air led to the invention of air conditioning and refrigeration. Sir James Dewar went off in a slightly different tangent and invented the thermos. The thermos was adapted for use to hold liquid hydrogen and oxygen.

Liquid oxygen and hydrogen fueled rocket propulsion and, viola, you have the Saturn V rocket and men landing on the moon

Here’s the thing that gets me about all this, until the very end, no one involved in this incredible chain of events and inventions and innovations had the slightest clue where it was all going to end up.

Everybody in this chain acted, invented, innovated, created, for their own reasons, to their own ends. The Burgundy dukes had no conception of air conditioning, never mind liquid oxygen. Yet without them Neil Armstrong never takes a stroll on the moon.

So, wow and what does this have to do with family law?

Just this – when you are involved in a divorce – amicable, contested, mediated, arbitrated, flat-out courtroom contest – and you say or act in the heat of a moment or moments, you have about as much say over the resulting consequences of those words and/or actions as any of the people in James Burke’s long, long lines of connections.

The only definite is that it will, somehow, someplace, come back to you. And not in a positive, “one small step for man” way.