Dog Days of August and What I think About Between Cases

Yes, it’s the dog days, I’m working on a post about ‘Jerks and Family Law’, thinking and working on several cases, getting ready for mediation hearings. driving … so, thought I’d post something about what I think about to ‘get away’ for a few. This is one of the results, the ten best cartoon dogs of all time. I offer this while absolutely realizing I’m treading on sacred ground for a lot of people. Be that as it may, I’m willing to put my deeply held beliefs out there for all to judge. So, judge away.

10. Scooby Doo:  Shocking, I know, putting Scooby here is like doing a list of the top 50 movies of all time and 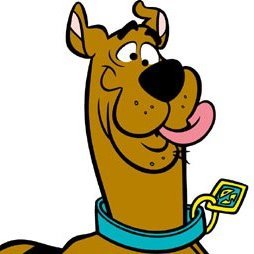 putting Citizen Kane at 50  (if you think Citizen Kane SHOULD be #50, by the way, then you are probably really outraged with Scooby at #10 here). Actually, to be honest, I wouldn’t have ranked him at all but for the fact he is iconic, particularly with the all important 20-50 year old demographic. What do I have against Scooby?  Aside the fact he’s lazy, unreliable, totally faithless, and a world class coward? Probably this: his only redeeming quality is the fact he’s just smart enough to know he should be scared.

Disagree?  Ask yourself one question, would you want Scooby next to you in the foxhole? Exactly., not quite a shining ambassador for canines . . . alright, he can be funny in limited doses… 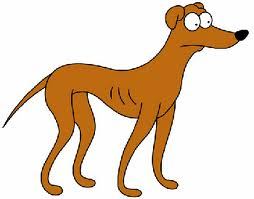 9.  Santa’s Little Helper:  The Simpson’s dog, and a rescue dog to boot. A genuine part of the family, loved and valued despite many, many evident flaws, faux-pas’ (as in eating Bart’s prized carrier pigeon) and temporary displacements by the ‘pet of the day’ (see carrier pigeon above, Laddie the Collie, Spider Pig, many more). Santa’s Little Helper is always there, always faithful, patient and loyal. 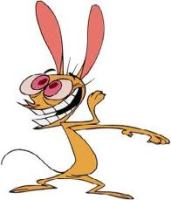 8.  Ren: A violent, sometimes profane, occasionally psychotic, always hyperactive, height-challenged, scrawny, asthmatic chihuahua  paling around with a cat – Stimpy – who makes Scooby Doo look like Stephen Hawking on steroids in comparison. He did things every bit as gross and disturbing as anything our non-star, real dogs do on a semi-regular basis and made it funny.  At times hysterical.

Ren & Stimpy was a satirical series aimed at changing the cartoon landscape, something they succeeded in doing, paving the way for South Park and others. (By the way, what happened to all the pets on South Park?  I don’t recall having seen any of them of late.)  Thus his place here.  Plus the fact that pound for canine pound he gave the most laughs of anyone on the list.

7. Astro: “Rut-roh, George” says it all. Astro isn’t the Jetson’s pet, he’s George’s best friend, Norton to his Ralph . . . . he shares equally in George’s frustrations, lame plans, blame when things go bad, joy when things go right. Astro’s a pal, a wing man, a co-conspirator, a confidant. And, he talks, in a fashion (a solid ten years or so before Scooby so suspiciously did so in such similar fashion) – who doesn’t want to hear what their dog has to say?

6. Huckleberry Hound:  In my, ahem, research for this post, I found most people have forgotten Huckleberry Hound – or, at the very least, have him balled up in a mist of dim memories with Woody Woodpecker and Heckle and Jeckle.  The Huck (as he should be referred to, ala The Dude [see The Big Lebowsky] stands on his own (the Huck Abides?).

Dapper – c’mon,  bow tie!- slow talking, but wickedly insightful and witty.  I don’t know how well he would play today in the fast paced worlds of Family Guy, The Simpsons, South Park, Robot Chicken, but the Huck was worth the wait, he didn’t blather like Scooby, or growl-jowl-mimic human speech like Astro, he was erudite in his own, slow way.

A canine cross between Shelby Foote and Garrison Keillor. 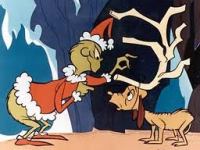 5. Max:  The most loyal, easy going, most put upon dog in cartoon history. Max never wavered while patiently awaiting the Grinch’s transformation.  His heart was always ten sizes too big.

4. Brian:  He’s formerly known as Brian Griffin because he is indeed a member of the Griffin family (need I point out he’s the smartest member as well?).  Intelligent, funny, at times urbane, actor, singer, novelist – so far unpublished, but working on it – reality TV star, Brian does it all.  He does have an on-again, off-again problem with alcohol – particularly martinis – but who among us has no vice?

When you get past the glossy veneer and intellectual facade, however, Brian is every bit the best friend, loyal, faithful, reliable, family dog Astro is, just oh so much more talented. 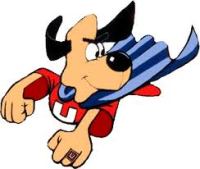 There’s no need to fear–
Underdog is here!
>Need I say more?  Shoeshine Boy’s  alter-ego is the Canine Superman with a sweet twist.  All powerful, but a little clumsy, and so smitten with Sweet Polly Purebred (he was developed in the late 50’s, so please keep any PC thoughts to yourself) that he seems somewhat myopic as to the general good.  Note, for instance, that he saves Polly and civilization time and again from the clutches of such villains as Simon Bar Sinister, Riff Raff,  The Electric Eel, Battyman, Tap-Tap the Chisler, and Overcat, yet leaves the city in shambles.  Underdog is the king of collateral damage, a fact frequently relayed to him, to which he invariably replied : “I am a hero who never fails;
I cannot be bothered with such details.”
Underdog speaks in rhyme in the sweet-funny-slightly–sad voice of the sweet-funny-slightly-sad Wally Cox and that makes the show, keeps it from being a one note joke.  A quick note for the fans of Mad Men – Underdog was created by a group of ad men as a vehicle to sell General Mills cereal.  The show was so succesful they quit Madison Ave and went into cartoon making full time. 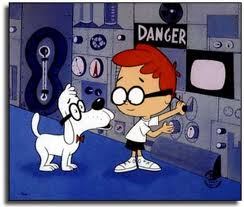 2.  Mr. Peabody: Odds are you don’t remember Peabody and Sherman, if so my best proof of the excellence of the show – part of  Rocky and Bullwinkle (a cultural highlight of the early Cold War years)-  is the fact that Robert Downey Jr. will be providing Mr. Peabody’s voice in the upcoming DreamWorks movie.

Mr. Peabody was a genius who traveled through time in his WABAC (pronounced way back) machine with “his boy Sherman”.  He exhibited all the best canine qualities imaginable along with an encyclopedic knowledge of history, total aplomb in the face of chaos and/or enraged despots, and the ability to end each episode with gut clenching, face cringingly bad puns.  A dog of epic proportions. “Oh, Mister Peabody . . . .” 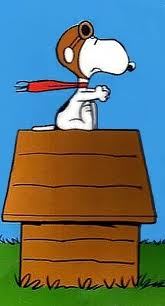 1.  Snoopy:  It’s almost a cliche to name Snoopy #1 cartoon dog . . . . not almost, it is.  But it has to be done because no dog, perhaps no animal cartoon character not named Bugs Bunny, is more recognized, more revered, more iconic than Snoopy.

In ‘real’ life, he’s a tremendous shortstop, Eagle Scout, dancer with an appreciation for classical music, decent tennis player (albeit with  a McEnroe-like temper). reader of War and Peace on a word-a-day pace.

Taken as a whole over the years, above and beyond a strip at a time, there’s a depth and a certain complexity  to Snoopy, particularly when he searches for his origins . . .  and discovers them.

There’s a little Snoopy in all the dogs listed here, he was an original.  Snoopy is a dog for all seasons.

Almost, but not quite:  Spike (the Rugrats Spike); Clifford; Commander K-9; Lady & the Tramp (inseparable); Pluto and Goofy (ditto, see Stand by Me for relevant discussion); Deputy Dawg. Dino was not considered because he’s a dinosaur.