About That Saints No-call . . . and Mediation 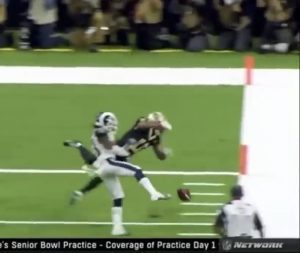 It’s impossible to miss, it was ten days ago and it’s still shown about 200 million times a day: the no-call on pass interference in the NFC title game. The one that sent the Rams to the Super Bowl. The two referees six feet or so away from the mayhem – the pass interference and an illegal helmet to helmet hit – were the only two people in the New Orleans Superdome who did not see it happen in real time. Or maybe they did.

Because here’s the thing about judging, according to a fairly recent study by Stanford Graduate School of Business PhD students Etan Green and David P. Daniels,

. . . a decision-maker’s call can be swayed by the magnitude of the stakes involved.

Almost always. Major league umpires – the best of the best with skills honed over years in the minor leagues – were loathe to make a final decision. Or, as Etan Green said, “Oftentimes, the umpires face a choice between a call that would be really pivotal and a call that would be relatively inconsequential . . . what we find is that they err on the side of the inconsequential call unless they’re absolutely certain that the pivotal call is the right one.” Green and Daniels have a novel theory on why this is so: because umpires are human. And most humans don’t want the responsibility of making a crucial decision with long lasting consequences. I don’t know what happened with those two refs in New Orleans. Or the other refs who missed an offensive hold and an offensive face-mask  penalty on that same play. But I can guess that nobody in black and white stripes with 1:49 left in a tied game really wanted to be the guy ‘who cost Saints/Rams a trip to the Super Bowl. I, you’ve probably already guessed, bring this up today because I believe in doing everything in our power to work divorce out through mediation. Judges are referees with a lot more power and not a whole lot of instant replay available. Moreover, they are also human. Reason enough to not be in a place where they have to decide your matter – through action or inaction. The Saints, of course, didn’t intentionally put themselves in place to let the refs decide things. But, they just as certainly so totally mismanaged the last two minutes of the game that they brought it about. I see the same thing in my practice, and there the stakes a hell of a lot higher. Work with me to work with your spouse to work things out so strangers aren’t put in a place to decide for you. Let’s let the judges off the hook.