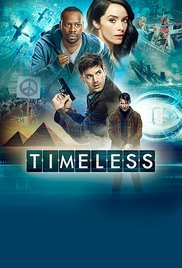 There’s a new show on NBC called Timeless. Apparently, it’s doing pretty well. It’s about a criminal who steals a top-secret government time machine and, of course, zips back in time to change things toward his own ends. Well. maybe. Whatever he’s doing (the NBC promos refer to him with the ever ambiguous ‘mysterious thief’) he’s zipping back to famous events and trying to change them for … well, who the hell knows.

The first episode had him saving the Hindenburg, then blowing it up, in the second he’s trying to make sure that John Wilkes Booth and his band of assorted nut-jobs complete their original plan – kill Lincoln, Grant, and the leaders of the government. Why? Who knows?

Chasing the mystery man is a historian who just happens to be gorgeous, a sorta SEAL/Delta Team guy with a heart, and an African-American scientist. They promise to do so through several seasons while saving history at the last second and … well, whatever.

My lack of enthusiasm in the show revolves around a plot device. Early on the historian talks to the bad guy and he tells her ‘he’s just following her book.’ She says, “I haven’t written a book,” he replies, “You will.” Then he shows her a nice, thick notebook in her handwriting. She asks for it, he says ‘no, all in due time.’

And …. that was it for me. I mean, the bad guy (who the show just telegraphed isn’t really that bad) isn’t showing her the notebook because it means the series would end. It’d be a made-for-TV movie and done in ninety minutes. Instead, the show’s writers are going to drag the viewers through a few seasons of teases, red herrings, blind alleys, and really crappy history (for a show about history, it’s really pretty shaky on the subject) because the two main characters can’t be bothered to talk to each other.

The late, great Roger Ebert used to compile a list of movie devices. Like: “Idiot Plot: Any plot containing problems that would be solved instantly if all of the characters were not idiots.”

This isn’t quite an idiot plot, but it is a variation – a story that exists solely because of inexcusable, irrational, lack of communication.

It’s ridiculous in a TV show. It’s sad when it comes to divorce and mediation and pretty much anything revolving around family. Just saying. Contact Us.