Arrival and the Super Bowl 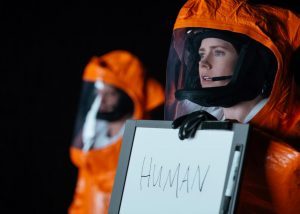 A very different kind of Sci-fi movie came out in the late Fall – Arrival. Sure, there were aliens – fairly odd ones at that – and the usual military involvement, enormous spacecraft setting up at 12 sites around the world at once, the threat of all -out war hanging over everything, and …

… well, that’s just the thing. The ‘and’ here are a linguist, a team of computer experts, and a theoretical physicist working hand-in-hand to figure out what the aliens want. That’s it. No Independence Day pyrotechnics here, just a lot of talking and theory and intelligence.

It all revolves around the absolute need to not bring any preconceived notions or assumptions to the table. None. Intent is as important as it is hard to ascertain. At an early point in the movie, the linguist, Dr. Banks (Amy Adams – amazing) explains, “We need them to understand the difference between a weapon and a tool. Language can be messy, and sometimes one can be both,” what matters is the intent of the person with the hammer.

What the movie makes startlingly clear is that communication cannot be a a ‘zero sum game’, i.e., it can’t be about winning or losing. Dr. Banks’ military supervisor, an impatient but supportive Army colonel (Forrest Whitaker), asks her at one point why she doesn’t try to teach the aliens chess to facilitate communication. Dr. Banks is appalled, she, very nicely, explains that that would be completely counterproductive. Competition, she says, is anathema to honest communication.

It’s not often I can sit in a movie and be so struck at how sharply it speaks to me and my practice.

In Arrival, Dr. Banks is engaged in a non-zero sum game with the aliens – a successful outcome will benefit both parties. In non-zero sum games the players’ interests may be different, but they also very much overlap.

I mediate because the alternatives in family law tend to become zero-sum. That’s not good, because that means someone is going to lose. Often it is the children.

Don’t get me wrong, I love zero-sum games, I’m going to watch one along with a few hundred million other people in two weeks. The Patriots and the Falcons are welcome to their zero-sum game, I prefer my clients go in the entirely different direction and settle things as intelligently and diplomatically and mutually beneficial manner as Dr. Banks does. Come be one of those clients.