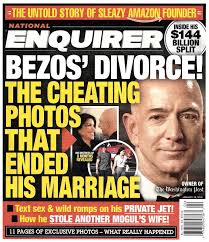 A quick update on the firm and a [belated] explanation as to why we never wrote about the Bezos’ divorce until this very second. That would be the Amazon Bezos, by the way.

So, everything’s fine here, we’re just approaching that time of the year when clients seem to get a burst of . . . well, let’s just say they want to get things done so they can move on. I’m sure the weather has something to do with it too, or maybe it’s the pollen, or the moon.

For lawyers ‘like us’, it’s a busy time of the year and, sometimes, kind of fun.

‘Like us’ means the kind of lawyers who prefer to work things out rather than storm the courtroom seeking retribution and letting a total stranger decide  . . . everything . . . after a few hours of deliberation [though we’re perfectly capable; but, like Shane we prefer to try alternatives before putting Jack Palance in his grave].

Which leads me to something we haven’t written about on the blog or Facebook or anywhere over the last few months – the Bezos divorce. A high profile (duh) divorce that was settled quickly, efficiently, and quietly even considering the whole Jeff, sexts, and The National Enquirer thing.

We thought it kind of stood for itself, you know, grown ups acting like grown ups. Thing is, we’ve heard the same things you probably heard if you had occasion to talk about it – “Of course they were mature and got along through the whole thing, they’re fabulously rich no matter what.”

A lot, maybe most, people believe this. That group counts among its members exactly zero family law and probate attorneys. Because we know that money – dollars and cents and liquid assets – are rarely the point of any settlement because they always represent something else.

There’s a great line in The Wild Bunch – “Ten thousand dollars will sever a lot of family relationships.” It’s true, just adjust the amount for circumstances.

Not quite sure this is true? Check out this this check – go ahead, take a long gander at the number, I’ll wait.

That was a settlement check penned by a ‘fracking king’ to his soon to be ex-wife toward the end of an incredibly acrimonious divorce. After months of cutthroat depositions and hearings and exasperated judges it came down to a fight over a final settlement of $1 Billion (yes, with a ‘b’) to the wife.

The husband contended that he had paid ex-wife to be $25 million during the course of the divorce for ‘living expenses.’ The ex-to-be responded, ‘great, but that had nothing to do with the final settlement.’

While waiting for a ruling – from an appellate court, no less – the ex-husband to be wrote this check and had it delivered. She refused it. A $975 million check refused over a $25 million dispute. After a bit of time and a whole lot of publicity, she finally deposited the thing, to the delight of her bank and the judicial system.

Just saying, the Bezos matter didn’t have to go so smoothly, it took work by both of them.

Think of this: a dispute with the Bezos had the potential to adversely effect Amazon, the Washington Post, and a whole lot more. And before you pooh-pooh that as ‘rich person problems’ (okay, ultra-ultra-rich) think about how many pension plans own Amazon stock and how many people work for … okay, you get the point.

Maybe the best way to put it is like this: acting like adults and working things out leaves the least amount of collateral damage. And that’s a good thing.