A Few Words About the Super Bowl

This piece had an entirely different introductory paragraph with 7:06 left in the fourth quarter of last night’s Super Bowl. Patrick Mahomes wiped it out over those seven minutes, but we’re going ahead with the rest because the 49ers will be back (as will the Chiefs). 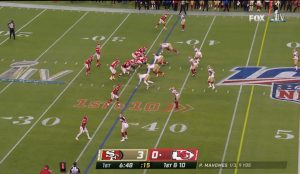 So, the 49ers lost . . . it was amazing they were even there in the first place. Memories are short or long in sports, never in the middle-range; which means most people either remember the 49ers from the 80s and 90s glory days or the juggernaut they’ve been all season long. Most have forgotten that they were beyond awful over the last five or six seasons.

Not just awful on the field, but awful as an organization. From 2014 through 2018 the 49ers were 17-27, but that only shows a tiny part of the whole story. As an organization, they were radioactive. They repelled free agents.  No one wanted to play there. They were known for their “toxic trinity of internal discord, poor morale, and regrettable personnel decisions.” Poor teamwork in being a cohesive body.

It changed when the 49ers hired John Lynch as General Manager and Kyle Shanahan as head coach two years ago. They gave them 6-year contracts because the team knew they needed a full reboot.

That reboot began when the new hires sat down and defined their relationship – that relationship would define the team.

They developed a vision statement, outlined their plans for the future, aligned their philosophies, came up with a decision-making process, and, probably most importantly, developed a method for resolving whatever arguments they may have.

All that decided, they imported it to the team. They talked to players with “candor and authenticity.” Every player knew – at all times – including when they were negotiating contracts – where they stood.  Accountability went both ways. Teamwork at its core, honest and straightforward, valuing every part of the team.

We’ve written a lot about acting like an adult in a relationship, even when it’s ending. The 49ers lost a game last night, but they’re perfectly positioned to move beyond it and continue their success – because as an organization they act like adults. This open and honest teamwork lays a stronger foundation for going forward, in any direction.

The lessons, we think, are obvious.

By the way, ‘candor and authenticity’ are two things you can always expect from Triangle Smart Divorce.

For more straightforward articles like this one, check out the rest of our blog:

Want to talk to someone about setting things straight in your divorce? Schedule a FREE intake call with a member of the Triangle Smart Divorce Team to start the process of evaluating the best strategy for you!  Click HERE to schedule.