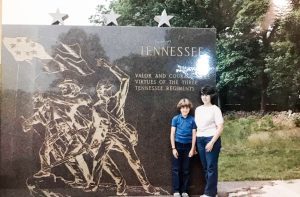 Chapter 2 of my upcoming book, My Journal Through Other People’s Lives

I have an associate, Lauren, who grew up in a small city in Ohio, the daughter of the quintessential and once ubiquitous small town general practitioner attorney.

From cradle to middle school her father told her she could be anything she wanted to be, the sky was the limit … but, please, don’t be a lawyer.

That, of course, firmly fixed the thought of being a lawyer firmly in her mind. When it became evident, in her teens, that Lauren was on a laser beam path to law school, her father’s plaint became, “Okay, just, please, don’t be a family law attorney.”

That, again of course, solidified Lauren’s choice of profession and area of concentration – I hired her as a family law associate in 2017; she came with years of experience.

I’m not like Lauren, I had no thought of growing up to be an attorney; I didn’t watch L.A. Law as a kid; I didn’t have a lawyer father advising me on career choices in any direction; I didn’t grow up in a tidy, progressive small city.

I grew up in a small town on the fringes of the Great Smokey Mountains National Park. Blount County, Tennessee is never going to be immortalized like Faulkner’s Yoknapatawpha County. The best it can hope for, with its solid Scots-Irish heritage, is a passing mention in books like Hillbilly Elegy and White Trash: A History The 400-Year Untold Story of Class in America.

Blount County’s too far off the beaten path to be anywhere near the center of those books, hell, even Harlan County, Kentucky – made famous by Justified – is 140 miles dead north.

Maybe all I need to explain – and all you need to know – about Blount County and the nearby city of Maryville is that the town of Alcoa is exactly 2.37 miles from the center of Maryville and, for all intents and purposes, the center of the county.

The steel/aluminum company was not named for the town. ALCOA came to Blount County in 1907, stayed, took over as the center of, well, everything.

To say ‘as ALCOA goes, so goes the county’ was as true in the 1910s as it is today. The results since the late 1960s are obvious and show in every storefront in downtown Maryville. I’ve often wondered if Blount County is the southernmost Rust Belt community.

About my childhood in that rapidly drying up town: there weren’t all that many happy people. At least, not that I, my family, or anyone I knew could attest to.

A lot of family law attorneys, okay, the well-read ones, like to quote Tolstoy and the opening line of Anna Karenina, “Happy families are all alike; every unhappy family is unhappy in its own way.”

That did not apply to my childhood. I doubt it applies to anyone of Scots-Irish descent, particularly those who inhabit the same hills, dales, hollers, of the ancestors who flooded in to America and the mountains of North Carolina during the rebellions and civil wars of the late 17th and early 18th Centuries and had only managed to move a few hundred miles west since.

Generations of Scots-Irish who have lived in our hills with the men only venturing out to harass Red Coats, tramp up to Gettysburg, down to Cuba, over to France while ALCOA was annexing a chunk of the county, back to France again, up to Korea . . . and on and on.

The children – the 1980s children – of those men and the women who stayed put, myself very much included, then, would say ‘every unhappy family was pissed off for entirely different reasons but as far as the outside world, i.e. everyone not family, was concerned we handled it exactly the same: we internalized and put on a brave face and went on with whatever we needed to move on with.’ Acknowledge a problem? In the grave, maybe.

My family lived in a single-wide trailer by the cliched but very real railroad tracks. We had plenty of company.

I had a troubled, perhaps very troubled, upbringing – for various reasons. How troubled, looking back from a very safe distance, varies according to when I choose – by accident or design – to think about it. It’s a comfort to me that I think about it much less these days than I ever have and I envision the trend continuing.

My mother wanted to be a nurse. That hope started to fade when she became pregnant with me when she was sixteen and still in high school. Then, her brother was shot dead on their front steps. Really. She had to raise her younger brother. Then I came along and she got to take care of me as well.

At times, my and my uncle’s subsequent appreciation for such an act of selflessness could be measured only by the instruments CERN uses to detect the Higgs boson.

Mom never did get to nursing school, but she did take several college classes, earned her certificate in medical coding and settled into a career as a medical office administrator.

Dad was exactly that steelworker so out of date yet currently in the news every day, bitter and embattled long before Trump discovered his sub-species. He worked for ALCOA, the past tense has been applicable for a while.

Aside helping him with anything mechanical, after about age 10 we did not get along – an understatement, but enough for now.

Most of all our relationship felt like we were in a years long competition for some unknown prize until the day I left for college.

Everyone I knew beyond nodding to on the street had some family issue or looming crisis. We’d see glimpses at times, hear a whisper or two, rarely discuss it openly – and then usually only when something hit the front page of The Daily Times.

As happened more than once.

Had we, at any point before high school, sat down to swap family horror stories I have no doubt it would have – within minutes – devolved into the Monty Python sketch with the middle-aged men one upping one another with, “You were lucky to have a bed, we had to …” and on and on.

To recap: Mom a bit psychically bruised and working in a job more than a few steps below her aim and abilities; Dad 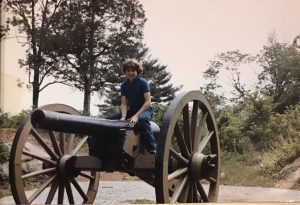 a last bastion of a dying industry; Scots-Irish; Southern Baptist (it didn’t, then or now, take hold with me); low-middle class (or poor as I now know it); as an infant, both parents were in high school; lived with grandparents before the train tracks; in a town centered around said dying industry; surrounded by beautiful mountains usually encased in cloud and fog; eventually moved into a house with a mortgage at 12% interest, thinking we were really making it.

I, though, had two things going for me – I was a good athlete and I not only loved to learn, I wanted to learn stuff on my own.

I learned to read before I went to school. As my mother tells it, one day she looked down and realized I was reading the newspaper. No, I don’t know how or why, just that it seemed like the thing to do at the time.

Looking back, it’s probably the most fortuitous thing I did in my life. Ever. It shocked my mother. She never forgot it.

She didn’t forget it when I started grammar school in our un-consolidated school district – no one was crossing any railroad tracks in any direction to get to school.

It was . . . uninspiring. Almost insipid. Trying to learn anything above the curriculum that probably hadn’t been changed since the Johnson Administration was impossible within the four walls of the school.

I was, in fact, discouraged from venturing beyond what was taught. It was either a case of ‘why shoot high and be crushed later on,’ or ‘who are you to think you can be better than everyone else.’ I never figured it out.

I know I was frustrated, I can’t begin to conjure up today, typing this, behind my desk, in my office smack dab in the middle of The Research Triangle, surrounded by top-flight universities, knowledge at my finger tips and in the air like pollen, what being cut off from ‘learning stuff’ felt like.

I just know it wasn’t good and I didn’t do well with it.

It was a struggle that, despite any family dysfunctions, did not go unnoticed. My parents saw I was ahead of my classes, saw that I read things not remotely on the syllabus (had one existed), was constantly exploring subjects I was never going to run into in the school I was in as well as the high school I was headed for.