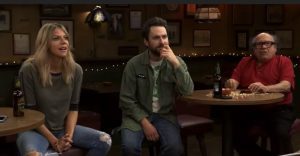 When TV shows need a break from being creative they resort to a time honored tradition – the ‘clip show.’ A clip show is exactly what it sounds like, the whole show is comprised of bits of episodes from the season so far.

Clip shows usually involve most of the cast sitting around and reminiscing, “hey remember when …” is the mantra.

Clip shows go back to I Love Lucy and have become cliches to the point where it’s frankly disappointing when a show resorts to one.

Particularly so when a show like the cutting edge It’s Always Sunny in Philadelphia launches one. As they did during the season that just wrapped up.

Of course, Sunny being Sunny, it didn’t quite go the way of every previous clip show in TV history. It spun off the

rails almost from the start because the characters started to reminiscence about things that never happened. It started out slow, where only fans of the show would notice that things weren’t quite right.

Soon, though, it spun out of control. To the point where ‘the gang’ remembered their famous Master of My Domain show. Which, of course, is perhaps the most famous episode of Seinfeld. Which Sunny did a frame by frame recreation of.

Great stuff. By then, though, ‘the gang’ started to catch on. Things weren’t coming out the way they all remembered it.

This led to this exchange: 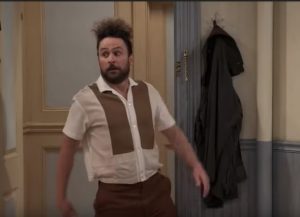 You guys are doing it again. You’re misremembering.

Every time you misremember something, you, like, run the risk of altering reality.

You’re saying I can change reality?

Yeah, well, no, I’m not saying. No, it doesn’t change reality. Reality is reality. I’m just saying it becomes your reality.

And there you have it, the reason for this post.

I have a friend that can’t put names to faces more than half the time, but has a photographic memory for dialogue. Mary Lou Henner – speaking of great TV comedy – is one of a handful of people with Highly Superior Auto-Biographical Memory (H-SAM). She remembers every detail of every hour of her life and can tell you and everyone else exactly what she was doing on any date . . . ever.

The rest of us aren’t so blessed – or cursed, depending on your viewpoint. We remember what we remember and the people we were with remember what they remember.

When I’m talking to a client about details of their relationship I have to keep this in mind. At some point or another I usually have to say something about this to my client.

Come to think of it, resolving those realities may actually be the key to a successful divorce.

Let’s talk about your reality some time.