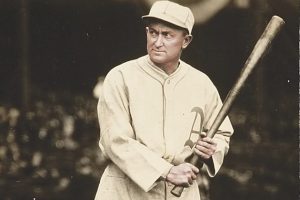 I’m iced in. Ok, not just me but a pretty good chunk of the greater Raleigh area. This is not normal, this is North Carolina, we are … coping.

I’ve just discovered what people in Vermont, Montana, and all of Canada have known since birth – snow and ice in the right quantities/mix lead to some pretty wild thinking after a day or so.

So, I started thinking about clients. Clients, past and present certainly, but mostly future clients. Specifically, probably around the 36th hour of flipping through the Netflix rotation (including the ‘Watch it Again’ section), who wouldn’t I want as a client?

It’s none of that. My ‘client I wouldn’t represent if they offered vast riches; the real location of Atlantis; the secret JFK assassination files; and Elvis’ whereabouts’ isn’t a who or a what, it’s a way of thinking.

This is best summed up by a wonderful story Bill James relates in his Baseball Abstract (I’m pretty sure it’s in every edition). In 1916 Ty Cobb was the best hitter in baseball and probably the most famous man in America. Going into the 1916 season he had won nine consecutive batting titles averaging .376 per season.

That’s about the time that Detroit Tigers manager Hughie Jennings received a telegram from a 18-year old kid out in the boondocks of Michigan. It was short and to the point – he could strike out Cobb on three pitches. If Hughie would send him $1.80 for train fare he’d zip down to Detroit and prove it.

For $1.80, Hughie had to know, so he sent it and the kid – very tall, very gangling – showed up. Presumably after a decent warm up, which Cobb presumably watched, the kid got to pitch to the guy who was about to have his first off-year with a .371 average.

It should be noted, by the way, that at the time the center field wall in Navin Field (later Briggs and Tiger Stadium) was 467 feet away.

The carnage over, Jennings went out to the mound and asked the kid what he had to say for himself.

The kid looked into the batters box and replied, “I don’t believe that’s Ty Cobb in there.”

There’s a lot to take from that. This is where I’m at – I want the client who’s willing to take on the Ty Cobbs of the world. I emphatically don’t want the clients who don’t accept reality.