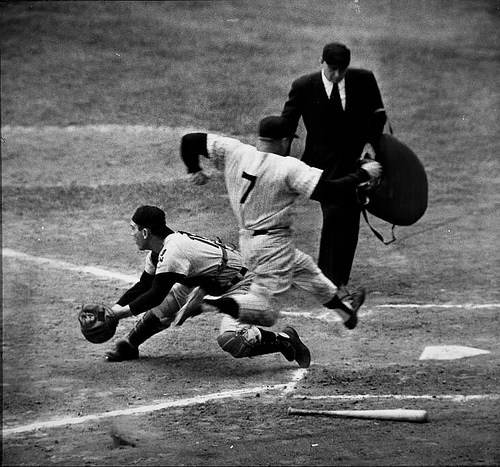 Fulfilled a wish-list item and finally saw the San Francisco Giants play in their beautiful stadium. Fun night even though the Giants are going nowhere this year. Somewhere along the line I was reminded of this story – I think it serves as a pretty good metaphor for opting for mediation over litigation and how we at Triangle do things …. or, maybe it’s just me and the breeze off  of the Bay …

There are several versions of this story, I choose to believe this one.  Sometime during the 1955 or ’56 season the Yankees brought up a nineteen year old shortstop. The Yankees had just won 7 pennants and 6 World Series in 8 years. The kid, however, was hardly cowered by all that, he was cocky and irritating.

His chief target was, incredibly enough, Mickey Mantle. Mantle had come up as a 19 year-old shortstop in 1950 renown for his power and speed. Mantle was timed at 3.1 seconds to first base, the fastest ever recorded. The rookie wanted to race him claiming he was faster.

By the mid-’50’s Mantle was still fast but had suffered a series of leg injuries, the most famous one in the 1951 World Series.  He didn’t want to race but, like an aging gunfighter in the Old West, he felt he had to accept the challenge.

After weeks of listening to the rookie’s claims, Mantle finally walked up to him in Kansas City and said they’d race. It was 100 degrees out. They marked out forty yards in the outfield. The rest of the Yankees came out to watch. And bet. Against the rookie. The rookie jogged to the starting line and said, “Okay, let’s go.”

Mantle shook his head, “Not so fast, I how do I know you’re fast? I only have your word for it.”

The kid was flummoxed. Mantle said, “First, you have to beat Bauer.” Hank Bauer, 33 year old outfielder, Marine veteran of Okinawa. And he looked it. The kid readily agreed. What he didn’t know was that Bauer was still one of the quickest Yankees. The kid won, but had to bust it the last twenty yards to do it.

Slightly winded he reported back to starting line where Mantle was waiting with pitcher Don Larson (of World Series perfect game fame). “Gee kid,”  Mantle said, “you beat an old man – guy was wounded in the war for Christsakes, didn’t tell me anything – you want to race me, you gotta beat Don here, you know, someone closer to our age.”

The rookie agreed (he had no choice with the rest of the Yankees watching and hollering), completely unaware that Larson, a great athlete, was the second fastest guy on the team. The kid beat him by a few feet.

Sweating, breathing heavily, the kid went back to the starting line where Mantle was waiting with Yogi Berra. “Wow, you beat a pitcher, big deal,” Mantle said, “beat Yogi and we’ll race.”

The kid looked at Yogi – stocky, short-legged, and a catcher – and readily agreed. The kid hadn’t been in the Big Leagues long enough, in the era before televised games every day, to know that Berra was one of the quickest players in baseball. The kid beat him by a whisker.

Drenched in sweat and panting he walked to the finish line to find a fresh Mantle in a crouch, “Nice job, ready …one, two, three go,” and he blew him away. The kid was barely able to finish in the heat.

Love this story … and I think it’s a pretty good representation of what we do at Triangle.