Picking up where we left off last week, let’s talk about the difference between a plan, planning, and preparing – on our way, I promise, to family law. 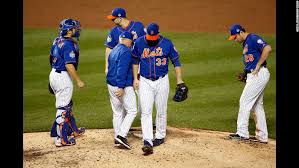 The Royals pick up on a tiny, obscure, infinitesimal-in-the-scheme-of-things Met weakness: their first baseman, Lucas Duda, had the arm of an eight-year-old forced to throw with his weak arm because of a bike accident that left him in a cast for the summer. That may be too kind.

If you’re not a baseball fan let me put this weakness in perspective: a first baseman’s throwing arm may – may – affect the outcome of a baseball game once every three or four years. It’s seldom a big deal.  That’s why guys with crappy arms playing first base is a baseball tradition. Still, the Royals made it part of their planning.

Game 5, 9th inning, Mets up one, Royals at-bat, runner on third, one out, ground ball to third, David Wright looks the runner back, easy out at first . . . and, in contravention of all known and accepted baseball norms, knowledge, lore, and good common sense, the runner on third bolts for home. Surefire double play to end the game, a lob throw nails him by twenty feet.

Duda throws the ball away. Way away. Game tied, Royals win the Series in the 12th inning. The thing that strikes me most here is the runner at third’s – Eric Hosmer, himself the first baseman and hardly a speedster – almost instantaneous reaction. In a heartbeat – the grounder to third was smoked – he recognized the situation and remembered the plan. No doubt, no hesitation. He executed.

Or more specifically, planning for divorce. I have a friend, lives out of state so Triangle Smart Divorce can’t help him.  I’ll call him Brian. Brian should have gotten divorced five years ago. Brian knows this. Brian is a lawyer who won’t go near a family law case, but he can read a practice manual with the best of us so he knows how things work and in what time frames. And yet Brian still was not planning for divorce.

He has danced with filing for divorce several times over the years but never had a plan. A pattern emerged as ‘stuff’ would always ‘come up’: ready-to-file, but last kid finishing up high school, wait for graduation/kid graduates, the wife loses her job, a middle child about to graduate college/wife gets new, solid, job, youngest starting college, a health scare pops up/wife loses job, youngest transferring schools, middle child back in the house while she works nearby . . . and repeat as necessary.

One thing out of all of this is very real: he may make good money but it’s not enough to support two households where he lives.

Finally, this February, he came up with a plan – wife gets a job, he files and moves. There was more to it, it was fairly detailed, well thought out.

On February 28th his wife got a new job, well paying, with a very well-funded startup with lots of upsides. His youngest was headed to school in Chicago, where the oldest lives. Stage set.

His youngest had orientation in Chicago on March 9th, his wife brought him. She started her new job on March 11th. You could hear my friends exhale of relief all down the east coast. He was ready.

On March 14th, his city canceled their iconic St. Patrick’s parade. On March 16th his daughter was sent home to work ‘until things settle down.’ His wife was laid off three days later. The state completely shut down two days after that. As I write this his state is considered a ‘hot zone.’

Brian had a plan. A solid, realistic plan that accounted for some variables. He was ready  . . .  but he wasn’t Kansas City Royal/Eric Hosmer ready.

He froze at third.

There was, of course, no way to know the coronavirus would become a pandemic, and cities and states would shut down and institute social distancing. No regular person could have anticipated that. Just like no one can anticipate other natural disasters.

That’s the point – no one knows what tomorrow will bring. If you wake up and the birds are singing and the sun is up and it’s a regular old day totally absent viruses and mushroom clouds and hurricanes and volcanoes and you have a plan – for anything – now is the time to implement it.

There will never be a perfect time to file for divorce. Never. However, planning for divorce? There is always time for that.

Eric Hosmer it, folks. Act when you can.  And you still can.  Contact us.

Want to read more about what it takes to plan a divorce? Take a look at the latest on our blog:

TALKING ABOUT THE TIGER IN THE ROOM

LAW IN THE TIME OF CORONAVIRUS

Want to talk to someone about your Divorce? Schedule a FREE intake call with a member of the Triangle Smart Divorce Team to start the process of evaluating the best strategy for you!  Click HERE to schedule.