Europeans in the 16th Century were obsessed with the ‘New World.’ And why not, America was the great unknown, the land of unseen wonders, unknown peoples and animals. Books and pamphlets about the Americas were the viral media of the day. They were read and passed around with voracity.

So it came to pass in the 1570s that the informed Englishman knew that the wilderness known as Florida was populated by unicorns, lions, and dragons.

This was due to the writings of Sir John Hawkins, an English sailor (and slave trader and privateer and hero of the defeat of the Armada and a dozen other things, multi-tasking being a real thing back then).

Sir John was a lot of things but he was certainly no Captain Cook or Charles Darwin. He was a sailor, soldier, capitalist, killer, navigator, slaver, royal suck up … in other words, not the guy anyone would expect to come back from a year long cruise to Central and North America with solid observations about culture and nature.

Which he didn’t, of course. Hawkins skirted the coast of Florida very briefly as he was fleeing the Spanish after a 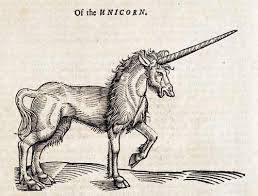 military disaster – the 1570s equivalent to an airport layover. In one of his brief stays along the coast he ran into a group of natives wearing necklaces of large animal horns. They didn’t look like any animal horns he had ever seen so he assumed they were from unicorns, another animal he had never seen.

At the time, there was a theory that ‘no beast could exist in nature without its natural enemy.’ Everyone knew that lions were the natural enemies of unicorns, therefore, there had to be lions in Florida.

When he returned to England, Hawkins published his tales supplemented by a crew member’s story of catching a dragon with a fishing rod using a dog as bait. (That sounds stupid but considering the abundance of alligators in Florida it has a lot more credence than the unicorn thing).

A false observation led to a false conclusion led to false knowledge, shared over and over again until it became accepted as truth and was shared some more.

I think I have just described most Internet stories about family law. (okay, a lot more than that, but I am a family law attorney trying to make a specific point). Posts, blogs, stories about divorce, custody, alimony, etc., are viewed and shared over and over again. The point is, though, that unless we know what the original author was looking at when they started, we can’t know how valid their conclusions are.

Did they see the necklace from afar, or did they walk over to the person wearing it, look closely, and ask where the horns came from?