I ran across two seemingly very different articles in the space of about ten minutes last week, the kind of serendipity that seems to happen when you scan through your newsfeed for the fiftieth time in an afternoon.

Two things on top of each other: Governor Cooper’s detailed plans about lifting the coronavirus restrictions in three phases over the next months and this headline from Wired Magazine:

Coronavirus has created an epidemic of weird dreams

I’m betting we’re all dreaming of a coronavirus free world right now – some of us a little more creatively and vividly than others ( I’m intrigued by the ‘Oprah on a murderous rampage’ dream) – and we’re all making plans about what we’ll be doing first. I for one will be eating, drinking, and being merry at the Wild Turkey Lounge at The Angus Barn.

Governor Cooper and staff certainly have made plans. The level of detail in North Carolina’s plan is impressive and, in many ways, oddly comforting. I mean, we get to see a schedule of . . . real life things . . . after weeks of uncertainty.

In other words, it’s nice to see a plan, any plan, after more than a month of day-to-day ‘lets-get-by-while-playing-it-by-ear’ living.

But here’s the thing about the governor’s plan – which, by the way, is the problem with every plan – and attendant schedule: it will almost certainly not play out this way. That’s not necessarily a negative view – the schedule could always end up being accelerated after all – it’s just the nature of any plan that must rely on other people and nature in any way. After all, other people and nature rarely get the memo.

Plans are great, plans (and planning) are essential, plans are necessary – but no one should ever bank on a plan working as . . . well, planned.

No one should be reading Governor Cooper’s well written, well thought out, step-by-step plan to ‘phase’ us back to ‘normalcy’ by totaling up the weeks of each phase, marking the days off the calendar, and scheduling a multi-generational family reunion for the first Saturday the plan shows ‘good to go.’

That kind of reliance on a plan was more than adequately summed up in the late 1700s by Robert Burns. Everyone knows about his ‘ best-laid schemes (yeah, he never wrote ‘plans’) of mice and men’ but few know the line after ‘Gang aft agley’ :

An’ lea’e us nought but grief an’ pain,

Joe Louis put this a little plainer in the 1930s, “Everyone has a plan until they get hit.”

Strict adherence to a plan, regardless of circumstances rarely achieves much beyond Burns’ ‘grief and pain.’ 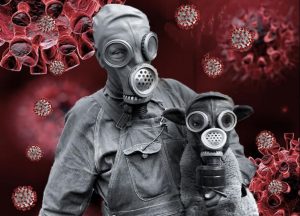 About the image: “Deirdre Barrett, a professor of psychology at Harvard University who studies dreams, made this photo illustration of a recent COVID-19 dream she had.”

Think of what were perhaps the most carefully planned events of the 20th Century: DDay and the Apollo Moon landings.

DDay, June 6, 1944, was planned for over two years. Everything was studied from the Normandy tides to the density of the sand on the beaches to the German Army’s sleep patterns. Yet, an unusually strong storm for the English Channel in June rolled in and delayed the invasion for a day and the Americans landed on the wrong beaches on the Omaha section.

Everything went wrong on Apollo 13. The plan was for Jim Lovell and Fred Haise to walk on the moon while Jack Swigert flew above them. It was a testament to NASA that they survived: the was to get to the moon, there were no plans to fix an explosion and power loss on an Apollo mission.

It’s clear in both events that adherence to the plans would have proven disastrous.

We’ve been having some very vivid dreams lately. A lot of them take place in a world where COVID-19 is no longer a threat. That world looks a lot like the world before the pandemic. That would be great, but no one should plan to go ‘back to normal’ and no one should plan for a specific date.

We can, though, plan what we’ll do when we can get out and do it. Of course, at that point, we’ll have to adapt to the ‘new normal’.

In terms of divorce, the ‘new normal’ is going to be courts with enormous backlogs of cases due to all the canceled trials.

What does that mean? We’ll cover that in Part Two.

Want more to read more like this? Check out the latest on our blog:

TALKING ABOUT THE TIGER IN THE ROOM

LAW IN THE TIME OF CORONAVIRUS

A FEW WORDS ABOUT THE SUPER BOWL

Think you need to talk to someone about making a plan for your divorce? Schedule a FREE intake call with a member of the Triangle Smart Divorce Team to start the process of evaluating the best strategy for you!  Click HERE to schedule.