WHAT DO THE FRAY, SCUBA AND DIVORCE HAVE IN COMMON?

Last week, I learned a huge lesson in empathy. It has to do with being in Over My Head while learning to SCUBA and having my first ever full-fledged panic attack.

If you have not learned to SCUBA, allow me to explain a little about the certification process first . . . essentially, you are given an instruction manual, videos and classroom instruction. Then you are tested on your knowledge and skills with a book test, a 300-meter swim, 10 minutes of treading water, 4 confined dives (typically in a pool), and 4 open water dives. Pass all those and you receive your open water SCUBA certification. I should back up a little bit more. You see, for me, learning to SCUBA was going to be uncomfortable. I knew this already, but I sought out a challenge and wanted to become more comfortable doing uncomfortable things. “How uncomfortable,” you ask. Well, I do not like water in my face while breathing. I hold my breath while under the shower head. I still haven’t mastered swimming freestyle because I swim like a turtle with my head popped up. It took a Total Immersion Swimming Program to get me comfortable with being able to snorkel. I could go on, but let’s just say I knew I was going to be SUPER uncomfortable. However, I was no longer comfortable going to warm waters and only snorkeling. I wanted to dive deeper and see more. So, I took on a challenge . . .

So, on to the testing . . . as you could probably guess, I did okay on the book test. (I missed two questions). I can tread water like a champ since the goal is to keep your face out of the water! And the 300-meter swim is no issue when you do it with a mask, snorkel and fins. Just kick to the end of the pool and do 11 U-turns. No problem there!

Then came the pool exercises with breathing from compressed air and through a regulator. Here’s where my uncomfortableness began to surface. Some of the exercises were learning to breathe through your mouth only, getting used to sounding like Darth Vader, having cold, dry air on the back of your throat, having a flooded mask and having to clear it and more. But I made it through those, too. Then onto other skills like using your buddy’s regulator to breath, how to make an emergency ascent if you run out of air, breathing from a regulator stuck in free flow (this is one involves sipping the air bubbles from the pool water), taking your equipment off underwater, dropping your weights and so on. More challenging and uncomfortable exercises, but I made it through those as well. Felt pretty damned accomplished actually. And slightly
comfortable. (Danger, Will Robinson)

Days 3 and 4 were set to be on the dive boat with 7 of us getting open water certified. Still patting my back for the past two days and knowing that I just needed to transfer what I learned in the book and pool to the ocean. It can’t be that different, right?

WRONG! Of course, I didn’t know how wrong I was until I boldly was the first person to step off the back of the boat and rapidly began plummeting 15 feet down when I was expecting to just pop right up after a split second underwater. I kicked up as I was taught and got myself to the surface.

The surface. Where I was rudely met with choppy water in my face, knocking out my regulator. I switched to snorkel from my regulator, but I couldn’t catch my breath and I was breathing in seawater because the choppy water was higher than my snorkel height. Back to regulator. No breath. Back to snorkel. Only seawater. And so on. I’m sure what felt like a minute was less than 10 seconds. An instructor grabbed me, put more air in my BCD (inflatable vest) and got me to calm my breathing from shallow gasps to solid 2-counts of in and out. Then I began floating like an otter and felt a brief calm go over me. So, calm, that in fact, I deflated my BCD and went under the water to check out the surroundings and to see if I could continue the dive. Indeed, I was more at peace under the water, but I was spooked. I inflated again and was in the process of reporting that I was done for the day when that rude choppy water came back and gave me a face full and mouthful of water. Back to panicking again. I’d never felt like crying, peeing and crapping my pants at the same time before. But on November 13, 2019, I learned what that felt like. So, back to the boat I went via being towed by my air tank by the Dive Master. 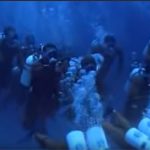 As we say in the South, to add insult to injury, now I had to get back on the boat. It had what I’m told is a Christmas tree ladder. At the pool, we had learned to hand up our fins and climb the ladder. None of that with a Christmas tree ladder. You go up in your fins, swinging your legs over the side. At the pool, we had learned that if you were tired or fatigued, to slip out of your SCUBA kit and the crew would help get it on board. None of that on this boat. At the pool, I had 12 pounds of weight on my weight belt. To accommodate to the extra buoyancy in saltwater, they had 20 pounds on my belt. Suffice it to say, getting on to the boat after having a panic attack might be difficult, but getting on the boat after having a panic attack and NOTHING being the way you were taught was also enough to trigger a second attack. Fortunately, the boat captain AKA Capt. Annie was right there beside me, holding up my air tank, confidently giving orders of RIGHT FOOT, LEFT FOOT, RIGHT FOOT, LEFT FOOT, DO NOT GIVE UP, DO NOT KNEEL, COME ON, LEFT FOOT, LET’S GO. ONE MORE. THERE YOU GO. If not for Capt. Annie and her Crew, I may have just slipped backward off the ladder and had a more serious situation.

I knew I started to recover after I started hearing this in my head: “Everyone knows I’m in over my head, over my head.” Thank you, The Fray for giving me humor in this situation. Then I knew I had really recovered when I could see so clearly what many of our clients have told me about separation and divorce. You can read all the books. Your lawyer can teach you everything about divorce. You can fill out the paperwork and gather the documents. But when the slightest or smallest thing does not go exactly as you had planned, had hoped or had prepared for, anxiety kicks in. For me it was freeze.

I didn’t properly inflate my BCD and then I panicked. For others it might be fight. They might have fought off the instructors trying to help them and made the situation worse.

What is clear for everyone is that when your amygdala is hijacked by a flood of stress hormones, the reactions are purely instinctual—fight, flight or freeze. Reason and logic go out the window. Survival is all that your brain is capable of processing.
On Friday, I was able to share this lesson with a client who had recently settled his case after a strenuous two-day mediation and was now acting like he was having some buyer’s remorse. After listening and sharing my SCUBA story, it turns out that he really wasn’t having buyer’s remorse. He understood intellectually that his settlement was a better result than any probable alternative in Court. But he was scared, because it was now “real” to him, like the ocean became “real” to me. And his instinctive reaction to being stressed was to fight. The comments he made while being anxious about the settlement looked like he wanted to back out of the agreement. So, I was wrong when I assumed my call with him after reading his very upset emails was going to be about why this was a good deal, was better than going to court and alleviated the unknown.
He knew all that. What he wanted and needed was a strong captain to guide him through the stress he was experiencing and not let the stress override his intellect and reasoning abilities. When he said, “I wasn’t prepared for how I’d feel when it was done,”

I knew exactly what he meant. I wasn’t prepared for how I would feel after taking a giant stride off the back of the boat because it was not in the book, we didn’t practice that in a 6-foot pool, and because no one told me what to expect. My SCUBA lesson
was that we can do a better job educating our clients about emotions they may experience throughout the separation and divorce process. Some feel joy, some are angry, some are sad, some are relieved, some feel guilty, some are embarrassed, some are down on themselves, some feel regret, and some have a combination of all of these and more. We do not know how we will react to something that is unknown until we experience it. But we do know that our clients are likely to feel emotions which they might not expect, and we can prepare them for that so that no one feels like they are in
over their head.