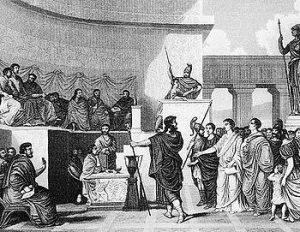 Tom Holland wrote a series of books about the Roman Empire. They are fascinating and highly entertaining, Holland has a wicked sense of humor (and irony) and doesn’t spare any of his ‘characters’ – it really makes for a different history read.

Most people know our system of law descends directly  from the Romans. Holland gives a great description of the way Roman law worked in the first book of his series, Rubicon. Actually, he gives several great descriptions as he relays – blow by blow – some of the more famous trials of Roman history before the Republic ended after the rise of Julius Caesar.

Some of it is instantly recognizable to anyone who has ever spent more than a few minutes in a modern day courtroom. Judge, jury, prosecutor, defense attorney, spectators, arcane rules of procedure rigorously applied.

The Romans had all that, in spades. Drop any one of my colleagues or clients into a Roman court in 25 BC and, outside the fact the trial was probably being held outdoors, they’d be comfortable in the setting, know where to sit and what to do. The Latin might be a problem, but even then more than a few words would make perfect sense.

The juries were larger – much larger – twenty-four to thirty-six citizens, sometimes more. Spectators could number in the thousands, think civil lawsuits being held in the Dean Smith Center. There were magistrates who specialized in the intricacies of the law, but they rarely presided over trials. The judges tended to be citizens trusted to be impartial, with the temperaments of NBA referees.

The lawyers could be anyone. Okay, any male citizen of the Republic. Prosecutors and defense attorneys had day jobs, merchants, farmers, up and coming politicians, senators. An aggrieved party could ask anyone to act as a prosecutor for them, the accused could ask anyone to defend him. Even then, it was generally accepted that only idiots acted as their own attorneys.

By the way, there was no family court, divorces in ancient Rome were granted upon the husband (and sometimes the wife or her family) saying the marriage was over. That was it, “Hi, honey, we’re divorced, catch you later.”

Trials in Rome weren’t necessarily simply contests between the plaintiff and defendant. They could take on an entirely different hue when the prosecutor and defense attorney had their own political agendas to pursue far beyond whatever the case was about.

Some defensive attorneys, men like Cicero, defended cases solely to defeat the prosecutor, usually another politician. Those matters became a contest between the lawyers with scarcely a thought given to why they were opposing one another in the first place. Jurors could easily get sucked into the contest of personalities.

Jury decisions were by majority opinion. Bribery was frowned upon but it happened with little to no repercussions beyond public opinion, a wildcard that could never be discounted. Spectators could get wild, their actions could most certainly sway juries concerned about getting home in one piece.

The similarities with our system are obvious, the differences are stark.

One thing, though, rings true for both – you take a case to court, anything can happen.