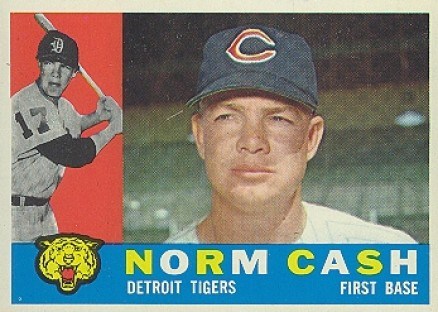 Know who had probably the greatest second season in Major League Baseball history? I’ll give you a hint, today would have been his birthday. I’ll give you another, he played in the majors for 17 seasons, was a four time All-Star, great fielder, and when he retired was fourth in American League history in home runs by a lefty behind Lou Gehrig, Ted Williams, and Babe Ruth.

Give up (without looking going to Baseballreference.com)? Norm Cash of the Detroit Tigers. Norm was a good fielder, a great teammate, was beloved in Detroit, finished with a lifetime .271 batting average and 377 home runs, and is largely unknown today outside of older Tiger fans.

When he is mentioned, it is usually in regard to 1961, his second year in the league. That is the year he told the pitcher/author Jim Bouton he ‘wished he never had.’

Cash was 26 in 1961, coming off a really good rookie season. Good, solid, it set expectations for a good, solid, future as an above-average major league first baseman. You know, the guys that are the backbone of good teams and make the stars more, well, star-like.

Going into the ’62 season, expectations for Cash were through the roof. He crashed. He hit 118 points lower, though the home runs were still there. After ’62 he settled into that ‘solid but unspectacular’ trend that really defined his career.

Which means, in reality, that he became one of those ‘never again approached …’ guys. When he talked to Bouton about it he was a few years from retirement, still popping away at his solid, decent pace. Still, people would say to him, “Wow, how about ’61?” with more than a tinge of disappointment and wonder.

As for Stormin’ Norman, he was pretty comfortable in his own skin and accepted he would never be the Norm of ’61.

His legacy is best summed up by his teammate and Hall of Famer, Al Kaline, “When you mention Norm Cash, I just smile.”