Inconceivable indeed . . . but that’s exactly who we’re writing about this month. Fine, by the way, if you have no idea who Joey Votto is, especially after the baseball shut down. We’ll fill you in.

Here are the essential Joey Votto facts: he’s Canadian; the 35-year-old face of the Cincinnati Reds; has put together a serious Hall of Fame resume since taking over first base as a precocious 23-year-old. He’s known for carrying a copy of Ted Williams’ The Art of Hitting wherever he goes during the season.

Okay, kind of cool, but none of that is a reason for us to write about him. So, let’s add this: Votto is an intellectual. “The game’s most cerebral player,” as The Atlantic put it earlier this month. A guy who does the New York Times crossword puzzle in pen; wowed the critics with his appearance in PBS’ American Master’s Ted Williams episode; learned Japanese after the Reds signed their first Japanese player – just to make him more comfortable.

Votto is a thinker. Usually, between April and October, he just happens to be thinking about baseball – every aspect of the game, anything that can get him an edge, improve his performance, make up for the effects of age on his body . . . before they are apparent.

About his swing in 2011 (and every year before) – it was a thing of beauty. A long, sweeping, graceful left-handed swing, reminiscent of Williams. Everyone marveled at it.

He scrapped his swing after 2011. He went with a short, squat, somewhat utilitarian swing. He was “willing to trade optics for success.”  It worked. He’s successful, he could care less how he looks doing it. 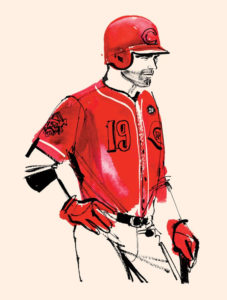 Joey Votto adapted. Right now we are all trying to adapt to rapidly changing circumstances. And probably will be for weeks or months. Once we begin to approach ‘normalcy’ there will also be some long-lasting consequences that we’ll have to also work on adapting to.

One will most certainly be the courts. Specifically trials. Trials of every ilk have been rescheduled and will continue to be rescheduled. Courts already crowded will be seriously backlogged.

We at Triangle Smart Divorce have always believed in mediating divorces wherever possible. With the courts about to experience monumental delays, now it just seems . . . smart.

Almost exactly four years ago, we wrote our first blog post: ‘My Day in Court’ and Inigo Montoya. The premise was simple: Many of our clients begin work with us with: ‘I want my day in court.’ We answer with a classic quote from The Princess Bride: “I do not think it means what you think it means.”

Once we outline the risks, stresses, costs, and everything else associated with going to trial, our clients adjust their goals and expectations. Then they adapt and we move along.

This will never be as important as now and over the next months. Never. Want, need, to get divorced? Help us help you to adapt to the new realities.

Really, the alternatives are “Inconceivable.”

Want more information about how to be smarter in your divorce? Check out the latest on our blog!

WILL YOU HAVE TO PAY ALIMONY TO YOUR EX-SPOUSE?

Want to talk to someone about being smart in your divorce? Schedule a FREE intake call with a member of the Triangle Smart Divorce Team to start the process of evaluating the best strategy for you!  Click HERE to schedule.