It’s a great month to be a Family Law Attorney! The holidays are rolling in; Cary is festive; we’re looking back on a . . . um . . . interesting 2019 while enthusiastically planning for an exciting, productive 2020 . . . and all everyone we know wants to talk about are Charlie and Nicole.

Nicole and Charlie are the protagonists of Netflix’s latest enormous hit, Marriage Story. A movie by a great director, with an impeccable cast.  It’s already been nominated for 6 Golden Globes,

It’s big–it’s about divorce.  Family law lawyers across the country are being asked – on a daily basis – what we think. About Nicole and Charlie, their relationship, their child, Henry, the process, their lawyers. the result(s), and, mostly, Marriage Story’s authenticity.

I’ve heard variations of “Is it accurate, Jenny?” all week.  I’m sure it’s not going away anytime soon.

It’s a pretty broad question and one I’m hesitant to answer. Do you mean emotionally? Or do you want a critique of the way they handle the legal issues? How about the legal procedure – especially service, jurisdiction, court hearings, and … well, you get the point. 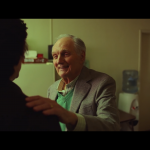 It’s a movie. A good one. My take: it was raw and realistic on many levels. Oh, and as a lawyer, I’m much more Alan Alda than Ray Liotta or Laura Dern, but that should probably be taken in context.

But – I’m a lawyer.  Marriage Story is an important, widely seen movie that will be back in the news all the way through award season early next year, and it’s about my area of the law.  BUT, there was always going to be a but – something really bothered me. Early in.

Mediation failed. Somewhat spectacularly. With a definite thud. Spoiler alert, by the way (although every review I’ve read reveals part of the movie) … the movie begins with Charlie and Nicole composing a list of what they really like about each other. A great technique to introduce their characters.

Turns out the list is for mediation. A mediation session where Nicole decides not to read hers to Charlie and the mediator. To say the least, she is not thrilled with the assignment.

That ends mediation. Not the session, mediation, period. The mediator is not exactly flexible himself. That’s it.  Nicole has some choice words for both Charlie and the mediator.  Mediation fails ninety seconds in, never to be revisited.

Another spoiler alert – when all is said and done, after immense legal fees, some unpleasant machinations, some sudden upheavals to Henry’s routines, raw emotions, arguments, and one really lousy Halloween – Nicole and Charlie reach an agreement that is almost exactly where they would have ended up if they had found a new mediator and hashed it out before court involvement and the ordering of a custody evaluation.

If you doubt that, consider the many times Nicole and Charlie stood up for the other when their attorney made some outlandish accusation. Every time.

Once again, mediation got a short shift in popular culture. As it always will. I get it.  I really do. I’ve written about it before. I’m writing about it now.  I’ll be writing about it for years to come–mediation does not offer the drawn-out conflict and inherent drama litigation does.

No one’s going to make a movie about Oslo Peace Accords when they can make a movie about The Six Days War. I’m sure there was conflict and tense negotiations – as there certainly is in almost every mediation – in Oslo, but, really, what are people going to watch?

That’s fine. I enjoyed Marriage Story.  I laughed, and I cried.  I just see no need for the constant ‘mediation bashing’ in movies in shows about divorce and custody. It leaves it out there for the casual media consumer to develop an unhealthy skepticism on an otherwise time-tested, rock-solid, cost/emotional/stress-reducing alternative to going to the Noras (Laura Dern) and Jays (Ray Liotta).

The casual media consumer may well eventually find their way into our waiting room.

Okay, enough preaching. One of my favorite dialogues of Marriage Story (There are several great dialogues.  It is, after all, fairly funny) – Charlie, in Bert’s (Alan Alda) office for his initial consultation:

Bert Spitz: Here’s how I see it. If we get bogged down in, “Who did this?” And, “Who did that?” And, “I don’t want to pay the two dollars”, it’ll just cost you more money, and time, and emotional stress, and you’ll probably end up with the same result anyway.

Charlie: Right. I mean, I agree with that philosophy. She does too, I’m sure.

Bert Spitz: And I always go with the truth, no matter where that takes us. You know, most people in my business make up the truth so they can get where they need to go. You’re just transactions to them. I like to think of you as people.

Bert Spitz: And not just you, her too.

That’s how we handle some of the most stressful times in people’s lives here at Triangle Smart Divorce.  With listening, pragmatism, and remembering that we all are just trying to get farther along on our journeys.

Want to read more on relationships in family law? Check out the latest on our blog:

Tips for Surviving the Holidays

WHAT DO THE FRAY, SCUBA AND DIVORCE HAVE IN COMMON?

Want to talk to someone about how to de-stress your mediation? Schedule a FREE intake call with a member of the Triangle Smart Divorce Team to start the process of evaluating the best strategy for you!  Click HERE to schedule.