Billy Mitchell and a Tale About Being Right … 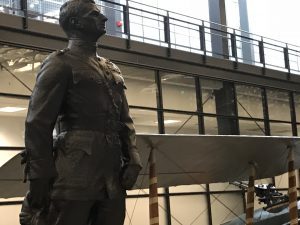 Do a Google search right now- this second- for Billy Mitchell and you’ll pull up about five pages on a controversy of staggering consequence- did a video game player really set the all-time score in Donkey Kong or did he rig the game? Really.

There’s another Billy Mitchell, just a tad more famous, though he’s getting a little more obscure everyday. I suppose the reasons are obvious, him having died before the advent of video games. Frankly, I only thought of him because I was at a week long seminar for lawyers in Chantilly, Virginia last month and I ran across his statue.

It was in the new Smithsonian Air Space Museum, about a mile from our hotel. That’s it to the right, Billy Mitchell, the plane in the background was the Spad XVI he flew- famously – in World War I. His statue is not there because he was a war hero, it’s there because he lost a court case in 1925, the first ‘Trial of the Century’ for the 20th.

Billy Mitchell was a lot of things, almost all astounding. A great pilot, fantastic organizer and leader, he planned and led the Allied Air offenses of September 1918. He came back to the US a hero. He came back with a lot of hard earned beliefs, almost none of which were shared by his contemporaries, especially those safely behind the lines.

He believed that air power was the future. He believed that the battleship was dead and aircraft carriers were essential, planes were the key to protecting US territories, bombers could sink ships, and Japan was a major threat to American interests in the Pacific.

He proved the bit about a plane’s ability to sink ships in 1921, despite the Navy’s protests and outright cheating.  Almost no one else took much else of what he said seriously except, ironically, the Japanese. Mitchell was a
Cassandra, he was a decade, at least, ahead of his time. The one thing he did learn in those early post-war years was something every Cassandra eventually finds out- no one likes them.

Mitchell’s was a privileged background- he was from a wealthy Wisconsin railroad and banking family, his father was a US senator, he grew up in France, graduated George Washington University. In short, he was someone who was used to being heard. He was, to vastly understate, loud and opinionated about what he believed. 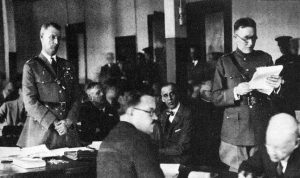 As a pilot, he was in the forefront of aviation safety in primitive days. He warned about safety issues loudly and continuously. Again, he was usually ignored. He did, however, mange to infuriate the army brass, the navy as a whole, future President Franklin Delano Roosevelt, and President Coolidge.

When the Navy’s first rigid airship Shenandoah crashed in a storm in September 1925, killing 14 of her crew, Mitchell exploded. He accused the Army, Navy and War Department of gross incompetence while throwing out the ‘T’ word – treason. He didn’t say it to a few friends or colleagues at an officer’s club, he said to the newspapers and radio. The quotes spread around the country like wildfire.

He was court martialed, it’s said that the order came straight from Coolidge. Eight charges, all wrapped around criticizing his superiors. The defense brought in 90 witnesses, some famous, to testify that Mitchell was right, that everything he said was on the nose correct and if only the Army and Navy listened to him … The trial, though, wasn’t about him being right, it was about the insubordination.

The trial made for a terrific movie, 1955’s The Court Martial of Billy Mitchell starring Gary Cooper, and transfixed the nation trough December, 1925, but the verdict was never in doubt. Mitchell was guilty of gross insubordination. Mitchell was suspended from the Army on no pay for five years. He resigned rather than accept the sentence. Without his uniform, Mitchell found that his influence over all matters regarding the air was nil.

So, here’s the thing, something we try to impart to our clients – it’s great to be right about things, but being right is almost never an end all thing. Especially with legal issues.

Billy Mitchell’s rank of Brigadier General was eventually restored, he is the only individual to have a military plane named after him, the main dining hall at GWU is named in his honor, an act of Congress promoted him to Major General, and the statue was placed in the Air-Space Museum.  All years after his death.

That’s all great, now. But there is a very solid case to be made (books have been written about this) that had Mitchell not been court martialed and had figured out somewhere along the road how to play the diplomacy game instead of the bull in the china store gambit, he and the United States would have been infinitely better off.

If you doubt that, there’s this: in the early 1920’s Mitchell warned that an aircraft assault on Pearl Harbor was the logical place for an air strike to cripple the US Pacific fleet.