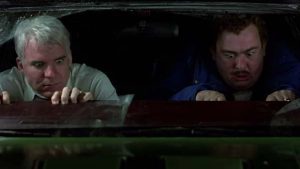 I don’t normally do this but, here goes, it is indisputable that Planes, Trains, and Automobiles is the greatest movie ever made about Thanksgiving. I usually invite discussion, even dissension, but not here. It is, subject closed.

Planes, Trains, and Automobiles is funny as hell, even on its hundredth or so viewing. It’s also affecting. Great dialog, great characters, even in the age of cell phones and Venmo and a dozen different ways to transfer information and cash instantaneously, it still works. Because … people. (ok, that and the fact that travel by planes and bus and train hasn’t exactly improved a lot since 1988).

There’s another dimension to it, though, it hit me a little while back, before I was really blogging. It’s this – the relationship between Del Griffith and Neal Page is a backward study of the kind of relationship I deal with everyday.

Del (the late, great John Candy) and Neal (Steve Martin) are thrown together by chance, but they certainly don’t meet cute (thank God) and their relationship starts out like many – many- relationships end. Every little thing Del does gets under Neal’s skin, every raised eyebrow and nasty look and passive-aggressive remark that Neal makes gets to Del, though he doesn’t show it, he needs to be loved.

But, of course, they go through a series of life-altering events, being robbed, having a train engine explode, taking a ride on a jammed bus (great line: Del, “Have you ever taken a bus trip before?” “No.” “Well, it’s not going to improve your mood”), a rental car disaster, more.

They get through the travails of traveling during the Thanksgiving rush. By the end, they’ve reached an emotional understanding, the kind of connection most relationships start out with. They would never had reached this point if not for the circumstances that keep them together – the only reasons they would ever stay together after their first few meetings, they are that different.

It really is a reverse microcosm of relationships. I think if clients can remember the connection and when they got through tough times like burning up the rental car while forgetting the dirty socks in the sink they can get to the next phase of their lives in great shape.

And that’s the goal, Right?