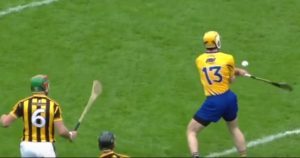 Happy St. Patrick’s Day! Here’s a story from Ireland and a pretty good metaphor for staying on top of things.

I have a friend who toured Ireland with his rugby team in the late ’80’s. After he played against the Dublin Wanderers, they gave him and his teammates passes to the All-Ireland Hurling Finals the next day. That’s basically the Irish Super Bowl.

If you haven’t been exposed to hurling, it’s . . . well, insane. My friend’s description, by the way. When a rugby player calls a sport insane, it’s got to be crazy.

Hurling is an ancient sport, was banned by the British as being too Irish, though, really, if they had allowed everyone in Ireland to play it, I’ve got to think they would have had an easier time there.

Hurling is a combination of field hockey, lacrosse, baseball, rugby, and ice hockey. It’s played with solid wood sticks; the ball is as hard as a baseball. The object of the game is to hit the ball into a soccer-like goal (3 points), or through rugby-like goal posts (1 point). Hockey-like checking – if not full tackling – is allowed.

The scariest thing in a game full of scary things is that players can flip the ball up in the air and smack it like a baseball coach hitting fungoes. They do this, though, while sprinting and with defenders draped over them.

The game was fantastic, the crowd trading songs, county flags flying, Guinness flowing, there were some injuries, about as many as you’d see in a rugby match. None serious. No one died. Which was amazing.

After the game, my friend and his teammates were allowed down on the pitch and got to chat with some of the bruised, battered, and somewhat bloodied players.

His first question was obvious, “How do you not get killed?”

The answer was as pragmatic as it was practiced, “If you stay in top shape and stick with the play, close to the man you’re marking, you can’t get really hurt . . .  by the stick.”

If you think about it, as my friend certainly did, it’s simple physics. If you’re right on top of the guy swinging for the fences the stick will barely sting – it just hasn’t traveled very far.

If, however, you’re an arm or stick length away when someone swings, you get the full force of the stick … if you’re another step off, you risk getting nailed by a rock-hard ball at 80 mph.

While my friend processed that, he was looking around the pitch and was struck by something. Unlike rugby, where men and women played at high levels into their 40s, there were no elder statesmen to be found. There didn’t seem to be more than a couple over thirty.

No Peyton Manning getting a last shot at a championship.

He mentioned it to his very patient new friend. The man from Galway laughed, “There are no old hurlers, ya’ got to know when to walk away from this sport.”

“When you lose a step and you’re a second late when you never were before. That’s it, you go play soccer.”

I’m sure you probably see where I’m going with this. When you’re engaged in a family law matter, give it your all, stick close to the issues, stay on top of the process, and know when to get out.