The Baltimore Colts and the Problem with Nostalgia

The NFL version of the Baltimore Colts came into existence in 1953. They played at Memorial Stadium smack dab in 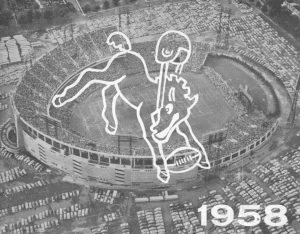 the middle of a sprawling working-class neighborhood. Playing in the NFL in the early 1950s barely provided a living for most players, they worked regular jobs around practices and games and throughout the off season. Those early Colts settled in the neighborhoods around the park and ended up working alongside their fans.

The Colts weren’t good. Their first four years they struggled to win five games, never sniffed the playoffs. But, their games sold well, at the very least a Colt fan could go to Stadium to support the players they knew while watching the ‘big boys’ like the Cleveland Browns and Detroit Lions come in (boy, have things changed). 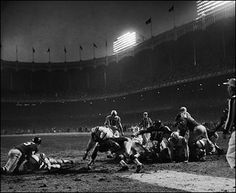 Things changed in 1956 though, and in a big way. The woeful Pittsburgh Steelers cut their fourth string quarterback, the Colts gave him a tryout and signed Johnny Unitas. In 1957 Unitas became the starting quarterback and the Colts had their first winning season.

The next year they won the NFL Championship in the game that changed the NFL’s fortunes forever – national television, the largest television audience of all time, Yankee Stadium against the Giants, the first overtime game … ever.

The Colts became good . . . very, very good. Their stars, Unitas, Raymond Berry, Big Daddy Liscomb, Tom Matte, Alan Ameche, Lenny Moore, many, many more were legends. Legends who lived in the same neighborhoods as their fans, walked to practice and games at Municipal Stadium, drank in the same bars, worked alongside them. Johnny Unitas was the face of the NFL by 1958, yet worked in a welding shop in the neighborhood.

Colt fans weren’t really fans, they were a part of it all. A Sunday night after a game (only Sundays back then), in the bar on the corner, anyone who cared to could ask Unitas why he called that play, or Liscomb what it was like to sack Y.A. Title. It’s not surprising, then, that Colt fans were devoted. The Baltimore Colt Marching Band, composed solely of fans, walked to games, gained fame of their own, in a homegrown sort of way. 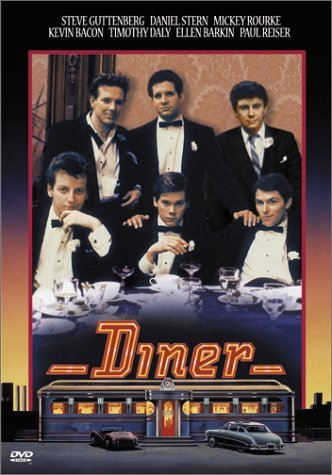 was not much of a stretch for the writer/director Barry Levinson, a Baltimore native and die-hard Colt fan. It rang true.

The Colts were good for the better part of the next 20 years, then they just got bad. They, infamously, traded Unitas to the San Diego Chargers, and went south from there. Still, though, their fans stuck with them, the band still marched to games.

Then, after the 1983 season, the Colt’s owner packed everything up in the middle of the night and escaped to Indianapolis.

Baltimore was crushed. The band stuck together, for awhile people still went to the stadium on Sundays (if the Orioles weren’t playing) and sat in the stands while the band played.

Baltimore wanted the team back and never stopped working to do so. Finally, in 1996, they got their team, Art Modell ironically abandoned Cleveland and moved the Browns to Baltimore … where they were quickly renamed the Ravens.

The Ravens play in a new stadium in the Inner Harbor, downtown Baltimore. There are no local neighborhoods. Even if there were, players in the ’90s and 2000s, no matter what position they play, have no need for a second or off season job. Players aren’t walking to the stadium. The band had to change its name to the Ravens Marching Band, but they don’t march much anymore ~ certainly not from home to the stadium. No regular Baltimorean  ever had a beer with Ray Lewis, Joe Flacco, et. al.

Johnny Unitas’ Colt passing records were all officially broken ~ by Payton Manning playing 589 miles from Municipal Stadium. As of 2014, the Colts had played more seasons in Indianapolis than they had in Baltimore.

Those Baltimore fans – the real Colt fans – were nostalgic for a time that, over a few years of no football, was was made better by receding into the past. As such (and of course) it could never be recreated. The Ravens were fine but they ere never going to be the Colts. Baltimore in 1996 wasn’t the Baltimore of 1966, the NFL of the 2000s is almost unrecognizable from the game played that night in Yankee Stadium in 1957.

Baltimore was nostalgic for a time, a place, people that could never be replicated. Those fans still pining for Barry Levinson’s Baltimore weren’t happy, those Colt fans who took the Ravens and the new for what is was … well, they enjoyed it. Chief among the latter, by the way, was Johnny Unitas.

Nostalgia, in small measure, is nice. In family law, it can be a hindrance. Think about it.