Thoughts About The Staircase 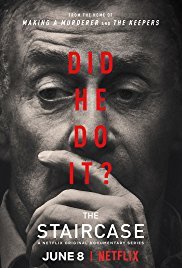 One of Netflix’s biggest hits this year is the true crime documentary The Staircase. A lot of you probably don’t need to see the series to remember the case, having – in many cases unwillingly, it was that pervasive – seen it covered every day on local TV here in North Carolina.

It was impossible to miss the trial and the subsequent appeal(s) in 2015, thirteen years after it all started.

On the off chance you didn’t live in North Carolina when it went down, or were in a coma, here’s a recap:

A writer, Michael Peterson, called 911, said he found his wife, Kathleen, lying at the bottom of a staircase in their mansion in Forest Hills, she was bleeding profusely. She died before the ambulance arrived. He said he found her there, the police claimed he bludgeoned her to death on the stairs.

He was arrested, charged with murder, hired an all-star defense team, went to trial, was convicted, appealed eight years later, won the appeal, was released from prison, cut a deal with the prosecutor, stayed home for good.

The series is thirteen episodes long so, yes, there’s a lot more to it. A French film crew started following everyone involved in the case – on both sides – very early on; the coverage was extensive, award winning, and almost surreal in its depth.

If you binged it on Netflix, or remember it live, you probably have an opinion, perhaps even a strong one, concerning Michael’s guilt or lack thereof.

And, that’s great, but it’s not why I’m writing this piece.

No, today’s post is about how pieces of The Staircase perfectly illustrate several of my blog’s themes over the last few years.

Surprising your attorney with a nugget of information they really should have known the day you hired them is never a good thing. In fact, surprises are bad after the first consultation; really bad just before depositions; terrible during a deposition; beyond horrific on the eve of trial.

Peterson did it to his legal team … twice. After a few months of investigation his lawyers were shocked to discover – from a local TV station’s evening news – that their client had had a series of one-night stands and casual sexual encounters with men for years that his wife may or may not have known about.

No matter, the existence of any number of emails were motive for the prosecution, another thing to explain for the defense, bad.

On the eve of trial, Peterman’s attorneys were watching the same local news station when a special news bulletin informed them that years earlier, when Peterson was living in Germany, he found his next-door neighbor dead … at the bottom of her staircase. The German authorities called the death ‘natural’ but talk about bad optics.

Peterson’s failure to disclose this little nugget was devastating, it came out of nowhere just when the defense thought they had everything set for their case.

Think ten minutes before the Super Bowl and Tom Brady tears a hamstring in the tunnel on the way out for introductions.

By the way, at the time Peterson had spent about $350,000 on his defense – going to court is expensive, he had no 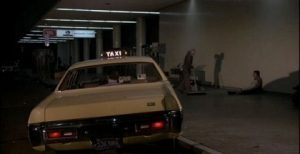 choice (as many of my clients do), of course – his attorneys had to immediately send their investigator to Germany, it was not cheap. When lawyers are forced to scramble, the meter pretty much runs like the guy in the taxi in Airplane!

Another one of my motifs over the years: a lot of uncertainty accompanies every court appearance. Your attorney can only control so much. Judge’s decisions, moods, likes, dislikes, and every other thing that makes them as human off the bench as the rest of us are not necessarily ‘predictable.’

In the last episode of the series, the filmmakers sat down with the judge. He comes across, as he had throughout the trial and appeal, as a decent guy, smart, sense of humor, who had clearly had his fill of the case over 13 years.

He very candidly said he wasn’t sure now – today – he’d make the same rulings against Peterson that he made in the original trial. These were make or break rulings on matters of admissibility that probably swung the case against Peterson.

The judge had been thinking about his decisions for years, questioned them now, rued about how close they were.

Which, of course, is always one of my major concerns- the wild card court variable of humans making decisions in the moment that have earth shattering effects for years.

What do I take out of The Staircase? Easy, tell your attorney everything, upfront; surprises in court cases are only fun in novels and movies; resolve as much as you can, when you can, leaving as little as possible to a court hearing and …