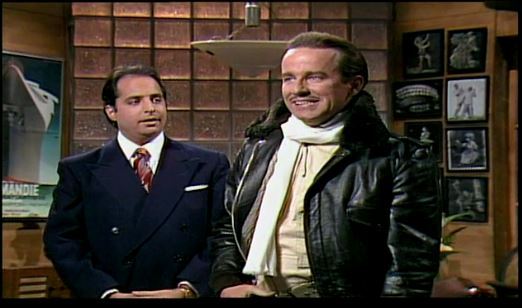 There’s a Saturday Night Live skit from 1986 called One More Mission; It’s really one of the great SNL bits of all time. (Right up there with the real ending of It’s a wonderful Life – which I think we’ll be writing about later this year).

One More Mission perfectly – Perfectly – sums up a chunk of what I do on a daily basis. Jon Lovitz is a 1940’s movie studio mogul and the late, irreplaceable, Phil Hartman is a washed up star.  A bit of it goes like this (click on the picture or the link above to watch the whole thing – NBC rigidly controls SNL video, so I can’t embed it):

Johnny O’Connor (Phil Hartman): [ reflecting ] Maybe I’ve made too many of these war movies. Maybe I should take a rest, huh, Harry?

Harry (John Lovitz): Well, I’m glad you brought that up, Johnny.. I was thinking you should take a rest, too. A permanent one.

Johnny O’Connor: [ confused ] What do you mean?

Harry: I think you stink!

Johnny O’Connor: Listen, Harry, if you’re unhappy with my work, tell me now!

Harry: You’re through, do you hear me, through! You’ll never work in this town again!

Johnny O’Connor:Don’t leave me hanging by a thread! Let me know how I stand!

Harry: I think you’re the worst actor I’ve ever seen, and I get five hundred letters a day telling me the same!

Johnny O’Connor: What’s the word on the street?

It’s very funny on several levels. But, of course, it hits home for me on a professional level because I deal in communication. It’s my medium. There are many layers, different circumstances, a hundred variables but it may just come down to these combinations: Lawyer (me) with client; client with spouse; lawyer (me again) with spouse’s lawyer.

Sometimes my conversations are virtually identical to the one above. Not so amusing, then.

But, here’s the important thing, the thing I try to impart to my clients – this kind of active non-hearing is not because the other guy is stupid, or dull, or just doesn’t get it.

It occurs because it usually involves some fact or ‘truth’ no one wants to face on a good day, never mind in the middle of a divorce. Like Johnny not wanting to face the end of his acting career.

My job is to get people through this. From any angle. Contact us.