But, Enough About Waterloo …. 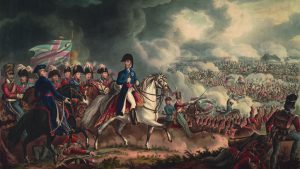 As family law attorneys, we’re asked a lot about ‘what sort of person don’t we want as a client’. There’s a few potential answers, of course, but one type of personality is almost always at the top of the list. You’ll recognize it right away. Here’s an example from history:

We still talk about it today, it was the defining moment of the 19th Century. June 18, 1815, the Battle of Waterloo. The ‘near-run’ battle that saw Napoleon defeated for good and the end of twenty-plus years of almost continuous warfare throughout Europe.

It was a brutal day and the battle wasn’t decided until late evening. The Duke of Wellington, a stoic rock on the field, collapsed that night, in tears, shaking with emotion, he tried to sleep on a pallet while a trusted aide was lying on his bed, dying. He didn’t write his report on the battle until late into the next day, while the wounded were still being culled off the field.

In the days before telegrams, it was a great honor to be chosen to deliver a victory message back to London. Wellington’s choices were few, many of his aides, his second in command, dozens of generals were dead, dying, or badly wounded.

Wellington finished his report and gave it to Lieutenant Colonel The Honourable Henry Percy, his sole surviving Aide-de-camp.

Percy set off for London, still in the uniform he wore at Waterloo. He reached London at 10 PM on the 21st. He 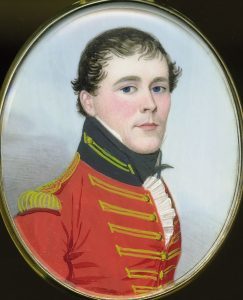 tried to present the dispatch at Downing Street, everybody who was anybody was at a dinner party being thrown by a certain high society hopeful named Mrs. Boehm. It was the social event of the year. Percy jumped back in his carriage and went directly to the Boehm home where he was told he would find His Royal Highness, the Prince Regent, soon to be King George IV.

He rushed into the home carrying two captured French Eagles. No one who was there ever forgot the pure drama of the moment when Percy approached the Prince, knelt, and proclaimed, “Victory, Sir, Victory!’

No one, that is, except for Mrs. Boehm. Her take on the historic moment:

“Very few of His Majesty’s subjects ever had a more superb assembly collected together than I had on the night of June 21st, 1815.

That dreadful night ! Mr. Boehm had spared no cost to render it the most brilliant party of the season, but all to no purpose! Never did a party promising so much, terminate so disastrously! All our trouble, anxiety, and expense were utterly thrown away in consequence of—what shall I say ? well, I must say it—the unseasonable declaration of the Waterloo victory. Of course one was very glad to think we had beaten those horrid French ; but still, I shall always think it would have been far better if Henry Percy had waited quietly till the morning, instead of bursting in upon us as he did in such indecent haste.”

‘Such indecent haste.” That sums it up. The one type of potential client we we really can’t abide, the ‘yes, but what about me’ person. No matter the circumstance – sickness, bad weather, natural disaster, news of the battle that changed European and World history forever – it’s all about them.

Not the ideal client in a family law setting.