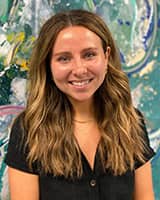 We were humbled and more than a little honored when Mackenzie Gokey joined the Triangle Smart Divorce team as Marketing Manager.

Humbled because Mackenzie’s social media knowledge is unworldly. It’s not only that she’s a wiz with Facebook; an Instagram prodigy; YouTube aficionado; LinkedIn phenom; Google oracle; podcast savant; and is, at this very moment, undoubtedly getting up to speed on social media networks still in the prospectus stage.

And . . . it’s not only that she writes great content, and blogs, and video scripts; or edited an Amazon #1 Bestseller; or can, obviously, handle any type of CRM system short of the NSA’s.

It’s this: Mackenzie identified Triangle Smart Divorce as the team she wanted to join – for its ‘culture, community, and mission.’

We’re honored to have Mackenzie on the team because it’s not every day an owner of an iconic sports team joins a family law firm: Mackenzie is a Green Bay Packers owner. Granted, there are 361,311 other owners representing 5,009,518 shares and the shares pay no dividends, benefit from no earnings, and can’t be traded on any exchange – but Triangle Smart Divorce maintains (and always will) that an owner of the Packers works with us.

Mackenzie grew up spending every summer and holiday season in Wisconsin (of course) and is a huge Big Red fan. She’s also obviously a fan of her alma mater NC State. She rationalizes the irreconcilable by noting that Wisconsin and NC State have been playing sports since the 1890s and have never met in football and only three times in basketball.

In her off hours, Mackenzie reads, runs, and plays tennis. She has a dog, Rooney, and a cat “that acts just like a dog” named Portabella. There are no reasons, marketing or otherwise, behind the names. Like Colin Farrell and Brenden Gleeson, she dreams of returning to Bruges someday.